What Is Wicca? - Why Am I A Witch? - Altars & Sacred Spaces - Magick for Protection - Three-Fold Returns - Blessed Yule!

"And Ever Mind The Rule Of Three: What Ye Send Out, Comes Back To Thee"

So I did that protection spell, and then was doing mediations using my statue of Athena and the pyramid each morning and evening. And for a while I was doing well! Filled with power, head held high, giving off "don't fuck with me vibes", the bullies were steering clear... But I was feeling angry pretty much all the time, it was actually pretty scary? I wasn't really in control. I think I might have overdone the Righteous Anger bit of Athena, too much Nike!

And then Alice tried to grab my bag one day, on the way to the bus after school. And all that rage and power just shot out of me, I SWUNG at her and thumped her just below the eye, and then RAN for the bus. And that evening my hand was throbbing, and wouldn't calm down. So I had to go tell Mum, and off we went to A&E and got an X-Ray, and yeah I'd broken a knuckle and had to have it splinted.

I guess that's the Law of Three-Fold Returns. I thumped her, I broke my hand. That's karma, that's why we're not meant to hurt people or use our magick for that sort of thing. You can hurt others, but it'll hurt you more!

So I did a sorta winding down ritual. Concentrated on saying thanks to Athena but giving back allllll the power and let down my wall, fulling grounding and centering myself.

Things have been better since. The bullies have left me alone, even though I'm back to being more timid and stuff.

And Mrs Richardson left (dunno if she's ill or what), and the new teacher is great, she's teaching us The Crucible and wears all-black and has awesome eyeliner and lippy and wears a pentacle! I haven't been brave enough to talk to her out of class about all of this stuff, but I'm still super happy she's here. She's almost as angry as I was when I hit Alice, but in her case I think that's cos she's quitting smoking not cos of witchcraft... Tho who knows! 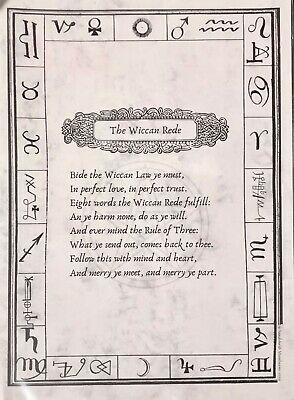 What Is Wicca? - Why Am I A Witch? - Altars & Sacred Spaces - Magick for Protection - Three-Fold Returns - Blessed Yule!